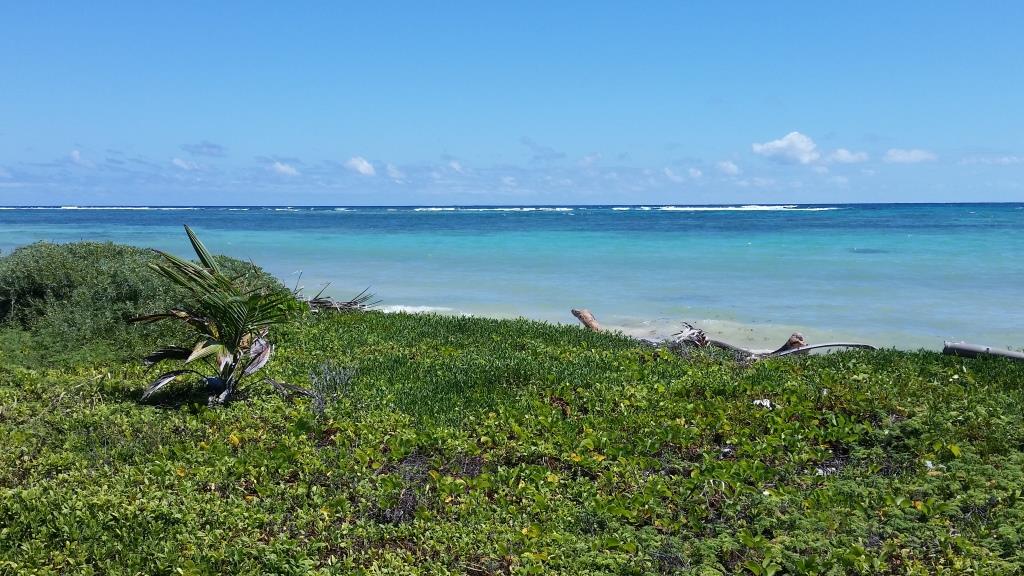 Rio Indio Kailuum consists of one 30 meter beachfront lot on the Caribbean shore. While almost two-thirds of the property is covered by protected mangrove forest, the beachfront is about 25 meters deep (82 feet) and has good elevation and picturesque vistas of the Caribbean Sea. This property is not deep enough on which to build a house with a foundation however one can build a free standing Palapa villa or even create small cabanas for rent. One could also put a RV camper on it.

While almost two-thirds of the property is covered by protected mangrove forest, each beachfront is 25 meters deep and has good elevation and picturesque vistas of the Caribbean Sea.  And with calm wave action and a close-in reef, the beachfront is enhanced by an opening in the reef which creates a bowl that’s perfect for swimming. The bay itself seems to “scoop” the pleasant sea breeze nearly every day of the year.

Rio Indio Kailuum is located on the beach road about 1.3 miles north of the Rio Indio beach access road off the paved coastal road and is a little over 5 miles north of the pueblo of Mahahual. This location provides the peace and tranquility of being secluded, yet is a mere 15 minute drive on excellent paved road to shopping and restaurants in Mahahual.

Rio Indio Kailuum backs up to a fresh water lagoon frequented by sport fishermen in search of giant fresh water tarpons and game fish. It is a perfect playground for kayaking and exploring the flora and fauna of the mangrove forests.

Perhaps most significantly, Rio Indio Kailuum is now served by the new electrical grid extension from Rio Indio to Placer. This stretch of beach is the only non-commercial beach community to have access to dependable, Federally-subsidized electricity outside of town.

Only several hundred meters offshore, the Mesoamerican Barrier Reef protects the coastline from possible turbulent seas. The coral reef, often known as the Mayan Barrier Reef, is the second largest barrier reef in the world – second only to the Great Barrier Reef in Australia – and extends 965 kilometers (600 miles) from the Yucatan Peninsula to Honduras. A diver’s and snorkeler’s paradise, the Reef is home to five hundred species of fish and one of the largest colonies of manatees on the planet.